Just back from my trip to the Okavango Delta in Botswana, organised by Bill Burns (http://www.botswanatrek.com)  and guided on the ground by Johnny Ramsden who runs a mobile-safari company with his wife Tasha. We were incredibly lucky to see so many animals close to – it almost seemed staged since each day we saw something different. Day one we followed  a female leopard padding along and trying to shake off her teenage daughter – day two it was lionesses – sleeping when we came across them – and then waking to go hunting. 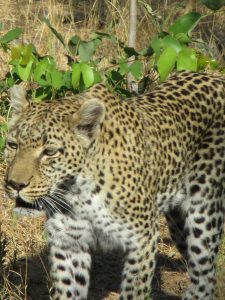 One was injured and Johnny was concerned that the cubs that he knew she had, would starve. The rains were late this year but we did have one storm – and as the thunder and lightening began at least a hundred elephants walked through our camp. The rain brought a welcome relief to the intense heat but it also meant that hundreds of thousands of termites hatched, followed by hundreds of thousands of flying ants. Another day we saw lions and on perhaps the most thrilling day of all we found a pack of wild dogs, saw them wake and accompanied them on their chase; we had to stop mid-chase to rescue the one other vehicle, belonging to ‘Cheetah Man’ which was there and which had got stuck in a water crossing. We saw the dogs get a rabbit and an impala and fail to get a baby wildebeest. Later that same evening seven lionesses padded through our camp in single file and the following day we finally caught up with the lions. [Any bookings should be made through Botswanatrek.com]

Follow this link for an article I wrote for the Oldie blog:https://www.theoldie.co.uk/blog/botswana-the-dream-meerkat-place