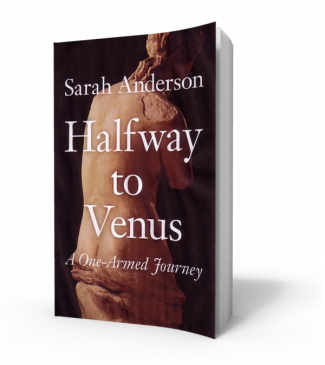 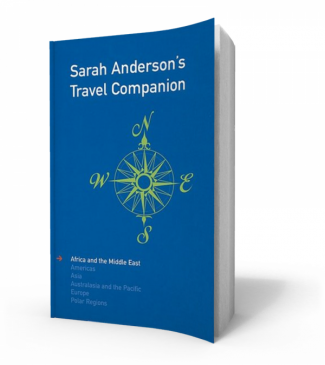 This is a remarkable book: honest and beautifully written. While humorous and engaging, it also reminds one of the importance of acceptance and courage. – Caroline Moorehead

Halfway to Venus is about Sarah Anderson’s life with one arm. It is also about other people who have lost their arms, about phantom and prosthetic limbs, about what hands and arms mean in different cultures and how they are portrayed in art and literature. Life with one arm is different in many subtle ways and this deeply personal book demonstrates why and how this is. Sarah Anderson examines peoples’ reactions, from the casual to the more highly charged; she looks at the effect, both erotic and otherwise, of having only one arm on sexual and romantic encounters, describing both poignantly and entertainingly what she has learnt. Among many other experiences, she visits Lourdes and, going from the sublime to the ridiculous, she takes part in a One Armed Dove Hunt in Texas.

Sarah Anderson lost her left arm to cancer when she was ten. This is her unflinching account – a death sentence, an amputation, and then the long slow struggle against other people’s attitudes, namely their own fear. What she calls her search for her “lost” arm leads Anderson well beyond a moving personal history and into a broader investigation of the significance of the hand and arm in art and literature. The result is an absolutely fascinating and empowering book. Nicholas Shakespeare

A remarkable act of self-understanding: brave and poignant yet with no taste of self-pity. Colin Thubron

Reviews include: Independent on Sunday – diary, The Independent, The Telegraph, The Times, The Sunday Times,  Disability Now, Observer,  The Daily Mail.

Available At These Locations:

» Disability Now
» The Telegraph
» The Guardian
» The Independent
» The Daily Mail